The Valaisan missions of the 20th century

It is difficult to know the total number of persons from the Valais who signed up for missionary work between the 1920s and 1990, after which date this phenomenon took a downturn. In a way, it could be considered that this religious emigration was the continuation of a tradition that had been interrupted by the end of the foreign service in 1870, and it consisted in conquering the world under the banner of Catholicism. While weapons were replaced by the pilgrim's staff, missionary activity was often conducted in close collaboration with the colonial administrations. Religious, political and military concerns were never very far apart.

This enthusiasm for missionary expeditions was spread in the Valais through the intermediary of various congregations. Under the direction of Abbot Mariétan, the Abbey of Saint-Maurice took steps to obtain a mission in China. Within a context of rising nationalism in Asia, there was a concern to counter the influence of lay European schools on the education of Chinese youth. This missionary project was never realized, but Chinese students went to Saint-Maurice in the 1920s. In subsequent years the abbey would also have to abandon its plans for evangelisation projects in Korea and Indochina. The first departures took place in the 1930s, first to India, where the abbey took up the direction of St. Joseph's College in Bangalore. This experiment lasted only two years, for the climate did not suit the canons from the Valais. The first lasting mission dates from 1934, when two canons from the abbey left for northeastern India, taking over in 1937 the "Sikkim Mission" that had been founded in 1882. After that, the abbey expanded its missionary activity to other parts of the world, such as Peru in 1974 and Kazakhstan in 2004.

Saint-Maurice was also the home base for the Swiss section of the Société des Missionnaires d’Afrique, founded in Algeria in 1868 by Cardinal Lavigerie. Its members were known by the name of "White Fathers". Arriving from Fribourg, they founded in 1913 at Saint-Maurice the Institut Lavigerie, from which they organized their missionary activity. The students could study at the abbey's college before leaving for missions in Africa. A second Lavigerie Institute was founded at Veyras in 1975.

Based at Le Bouveret, the Spiritan fathers of the Congrégation du Saint-Esprit worked within the framework of the École des Missions that had been founded in 1937 by Father Villetaz, a former missionary in Katanga. They exercised their missionary activity mostly in Africa and in the Caribbean.


Among the major congregations of the Valais that were involved in missionary work, there were also the Canons of the Great St. Bernard. From 1933 to 1948, a dozen of them went to the Himalayas, in a region located on the border between China and Tibet. As France held the religious protectorate of China since the middle of the 19th century, it was the Société des Missions étrangères in Paris that entrusted these Valaisan canons with the evangelisation of the region, thinking that they were better suited by virtue of their alpine origins to endure the Himalayan climate. Their arrival created conflicts with local religious authorities who considered the missionary activity as foreign interference in their affairs and social organization, which was based on a feudal system. Starting in 1937, the region was increasingly affected by the war that followed the Japanese invasion of China, as well as by the internal conflict between Nationalist Chinese and Communist forces. The assassination of the Valaisan canon Maurice Tornay in 1949—against a background of political and religious intrigues—added a further name to the list of twelve missionaries who had already been killed in the region, and marked the epilogue of a century of struggle for influence between Buddhist monks and Catholic missionaries in the region. With the coming to power of the Communists in 1952, all foreign missionaries were expulsed from China.

Among the various congregations based in the Valais that were actively involved in missionary work, there were also the Ursuline Sisters of Sion and Brig, the Hospitalier Sisters of Valeria, the Sisters of Saint-Maurice and the Franciscan sisters of Sainte-Marie des Anges.

The table below gives an idea of the extent of Valaisan religious emigration in 1955: 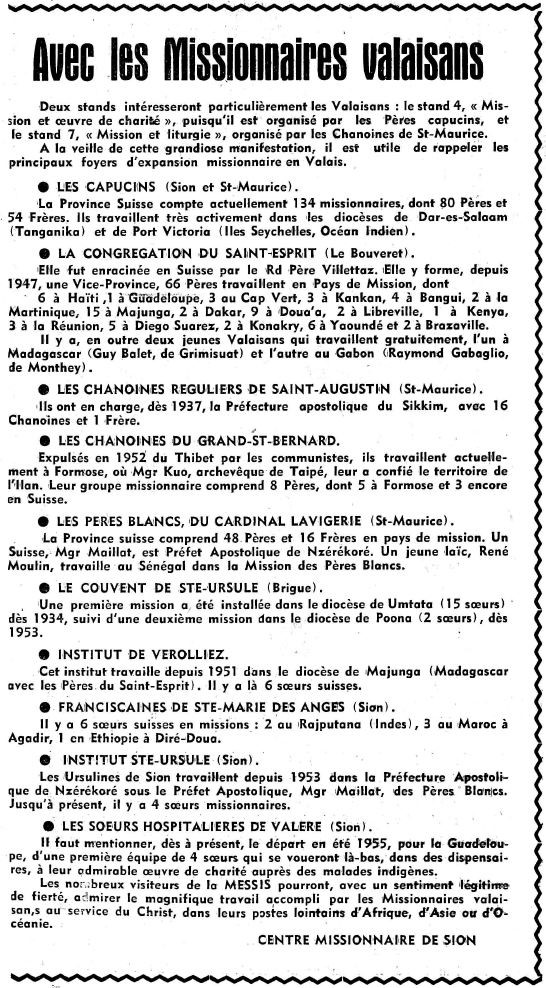 By continuing to browse this site, you agree to the use of cookies to improve your user experience and to provide website statistics.
Read the legal notice ok